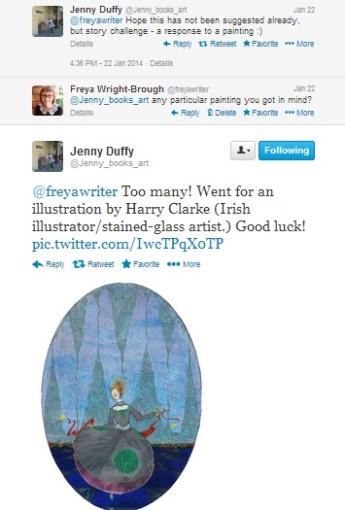 It started with a tweet. Jenny Duffy asked me to write a story in response to a painting. I asked her for one and she gave me gorgeous lady above. As per this week’s challenge I needed to find a new home for it. So I put it on a noticeboard. The type you might even see dance lesson adverts on. 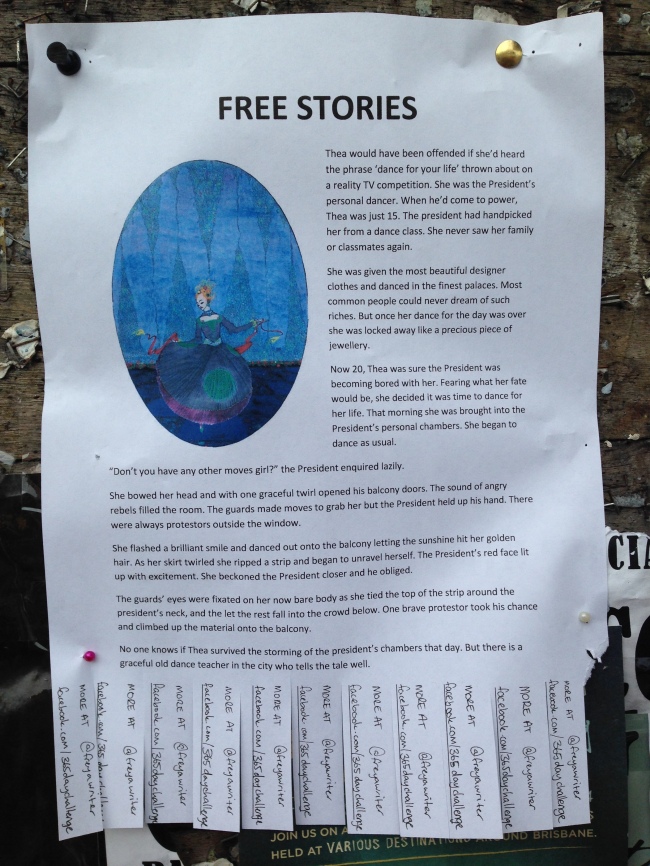 Thea would have been offended if she’d heard the phrase ‘dance for your life’ thrown about on a reality TV competition. She was the President’s personal dancer. When he’d come to power, Thea was just 15. The president had handpicked her from a dance class. She never saw her family or classmates again.

She was given the most beautiful designer clothes and danced in the finest palaces. Most common people could never dream of such riches. But once her dance for the day was over she was locked away like a precious piece of jewellery.

Now 20, Thea was sure the President was becoming bored with her. Fearing what her fate would be, she decided it was time to dance for her life. That morning she was brought into the President’s personal chambers. She began to dance as usual.

“Don’t you have any other moves girl?” the President enquired lazily.

She bowed her head and with one graceful twirl opened his balcony doors. The sound of angry rebels filled the room. The guards made moves to grab her but the President held up his hand. There were always protestors outside the window.

She flashed a brilliant smile and danced out onto the balcony letting the sunshine hit her golden hair. As her skirt twirled she ripped a strip and began to unravel herself. The President’s red face lit up with excitement. She beckoned the President closer and he obliged.

The guards’ eyes were fixated on her now bare body as she tied the top of the strip around the president’s neck, and the let the rest fall into the crowd below. One brave protestor took his chance and climbed up the material onto the balcony.

No one knows if Thea survived the storming of the president’s chambers that day. But there is a graceful old dance teacher in the city who tells the tale well.