Today I asked author and fellow 365 day story writer Chris Currie about how to survive after the 365 Day Challenge and if I am a writer yet. Make sure to read his stuff here and our first interaction here (that is probably one of my all time favourite stories from the challenge). Here is what he told me this time:

Congrats on nearly being at the end of your journey! I don’t really know what qualifies you to be a writer. Personally I think you should always aim to improve every time you write; it’s a non-quantitative skill after all. Discipline is probably the most important thing you have to learn when you’re starting out (trying to take writing “seriously”) and what you’ve achieved I think will go a huge way towards instilling the work ethic you need if want to make a career of writing. Anyone who’s mad enough to write a story every day for a year gets my vote without question.

So discipline will be important when I finish…

The army marched into the city. No one anticipated their arrival. Mum was at work so I hid with my little brother under the stairs. As they reached our street I expected to hear screams and gunfire. But it never came. I closed my eyes and listened. I could hear a menacing clicking noise and a fluttering noise like wings. I wondered if they were some sort of horrible alien. When my eyes opened again I saw my tiny brother waddling toward the front door. His fat fists could barely reach the handle. As I hissed at him to come back, his fingers found the handle and I rushed out to stop him. By the time I pulled him away it was too late. The door flung open.

But there was no horrible winged creatures. The flutter was coming from the papers that filled the street and the clicking was typing. There were thousands of them, armed with writing machines, they were typing and flinging paper onto the street. We walked out onto the street to find several other bemused city folk staring at the army. The writing soldiers seemed to be in a trance. My brother picked up some paper. I looked at it. It was a story about two little brothers who opened a door.

In the aftermath we found out they were the ancient writers from the mountains. Every four hundred years they would go on a training trek. They would travel the land writing about everything they saw, and only stop when they returned home.

So I am resurrecting the mentor scheme this month and checking up on my progress. I want to know- What is a writer? Why are there writers? Am I one? I think I am comfortable with saying I am a writer (maybe?) but I am scared of the real world… the world outside this challenge. I’ve set up a bunch of rules for myself… what happens when the challenge ends? Will I keep up the writing? My entire life has been centred around this challenge for 307 days and I don’t really know how to do life without it now.

So I asked Josh Donnellan who mentored me in March this year (read more about him challenging me to read my work to someone who would hate it here). Josh has recently put out a new book (go forth and read here – it has great character names) and had some great answers for some of my questions:

I think you’re a writer if you write. I meet so many people who say “I’d love to be a writer, but I just don’t read much and never really have time to write anything.” and I usually reply “yeah, I really want to be a marathon runner but I usually just sit around eating tim-tams and playing xbox.”

This all made a lot of sense and last paragraph really made me think. At the start of last year- before I had come up with this challenge- I wasn’t happy. I didn’t know what I wanted to do, I didn’t have a “proper job” and I spent my time thinking about writing (but rarely doing it). Now – I have never been happier, and I spend most of my time writing.

Before you read today’s story you’ll need to know one thing: Josh and I have a running joke about the word “mentee.” Here is something he wrote for me a while ago.

Mentees usually lived between the long reeds of words and grazed on the pages which grew on the lake floor. When they weren’t grazing, they liked to spend their time lamenting the loss of their habitat. For their habitat was shrinking. Soon there would be no words to survive on.

No one knew where the words had come from or when they would come again, they assumed it was a divine treasure. Many Mentees tried to ration the words as a way of coping, but once small Mentee decided to write some more. The other Mentees would ridicule him, some even called the writing blasphemy.

But the little mentee continued to write, he was sure the words had only come from their ancestor Mentees. Eventually the others were forced to ask him for words, and when they tasted them, they knew they had made a mistake. Now most mentees write, and they rarely spend their time lamenting.

This month I am going to resurrect the mentor idea and ask you an my mentors from the start of the year to give me advice about leaving the world I’ve created in the 365 Day Challenge. But before that I have a very special story to tell.

Today I sat in the library and was working on the conclusion of my thesis. I’d been thinking a lot about how flippin great it is to follow your natural curiosity, and as I wrote a particularly good sentence, a feeling came over me. So I wrote this note: 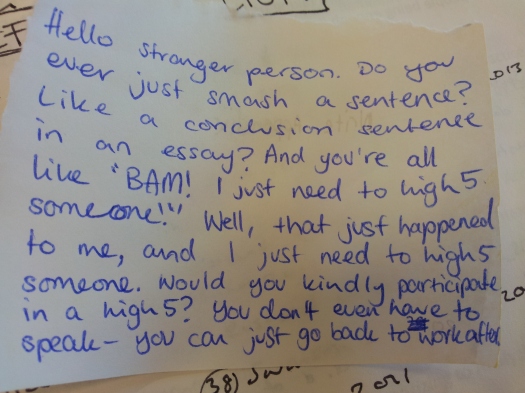 And then after wiping nervous sweat from my hands- I poked the stranger next to me in the shoulder and gave him the note.

He read it. Smiled. Our palms came into contact and the quiet library was filled with the sound of our high five. We giggled for a second, then went back to our work. Not a single word was spoken. I’m sitting next to him as I type but I think we’re both too scared to look at each other- it will ruin that perfect unspoken moment.

She did however, understand drawing. She drew all the time. At lunch break, in class and at home. She liked to imagine drawing picture with the different people everyone. So one day she left the school grounds. That day she drew 3 pictures before she was caught by her teacher, one with a bearded man and a pigeon from the park, one with the baker and one with a tattoo lady. She wrote them a note “Will you draw with me?” and when they put pen to paper no words were spoken.

At first she was in trouble, but then her teacher saw how much she wanted to draw. Her parents supported it and eventually so did the entire school. She would get one day off every week where her dad would take her around town, and she would draw with people. She drew everyone from politicians to musicians, and she began to understand people, even when they were wildly different to her.

Eventually, she fell ill. And people had to come to her. Then, she stopped drawing altogether. That day in parliament before beginning, as a mark of respect, they stopped to draw together. No speaking, no arguments, just pen on paper. There was said to be no arguing that day, only understanding.